Barbershop 2: Back in Business

This sequel to the 2002 film returns to the Chicago barbershop owned by Calvin Palmer Jr. (Ice Cube). His employees -- Isaac (Troy Garity), Terri (Eve), Ricky (Michael Ealy), Dinka (Leonard Earl Howze) and Kenard -- have their own personal and workplace problems, and a new barbershop called Nappy Cutz has moved in across the street. As Calvin tries to change the character of his business, Nappy Cutz and gentrification become a threat to the surrounding community.

Time for another haircut — the buzz is back in Barbershop 2. Calvin (Ice Cube), Eddie (Cedric the Entertainer), Terri (Eve), Jimmy (Sean Patrick Thomas), Issac (Troy Garity), Ricky (Michael Ealy), and Dinka (Leonard Earl Howze) are open for business again at Calvin’s Barbershop, with Queen Latifah cutting up as Gina, a stylist at the beauty shop next door. Calvin is again struggling to keep his father’s shop and traditions alive, this time against urban developers looking to replace “mom & pop” establishments with name-brand chains.

Be the first to review “Barbershop 2: Back in Business” Cancel reply

There are no reviews yet. 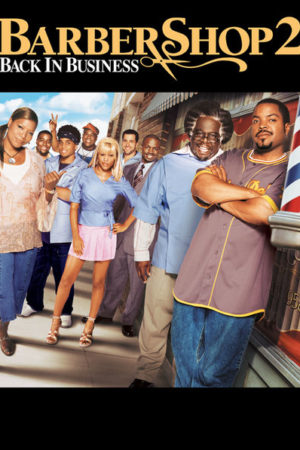